Iva Troj Interview, Brighton based and Bulgarian born artist, Iva Troj Zlatev builds up mirages of layers and glazes to utilise traditional techniques with contemporary storytelling. The lithe nudes combined with delicately depicted cultural images and gorgeously real animals trace alternative allegories and imagined narratives that seek to challenge the preconceived values apparent in traditional storytelling. Iva spoke to us to explain further how she constructs these multi-faceted pieces, ahead of her exhibiting at the FLUX Art Exhibition in London.

‘Troj’s knowledge of traditional art techniques was first inspired by the necessity for her to fit in with Cold War aesthetics of social realism. Alongside this, however, lay her acute perception of the reality existent beneath external structures.‘

‘The underlying stories, especially the conflicts, are much more interesting to me than mere portraiture. I want to know what’s going on, which is why I have always been interested in research. When I decided to go back to university and to get a second BA and a masters degree, I chose software design, philosophy, and cognitive science rather than fine art, because research methodology fascinates me.’ 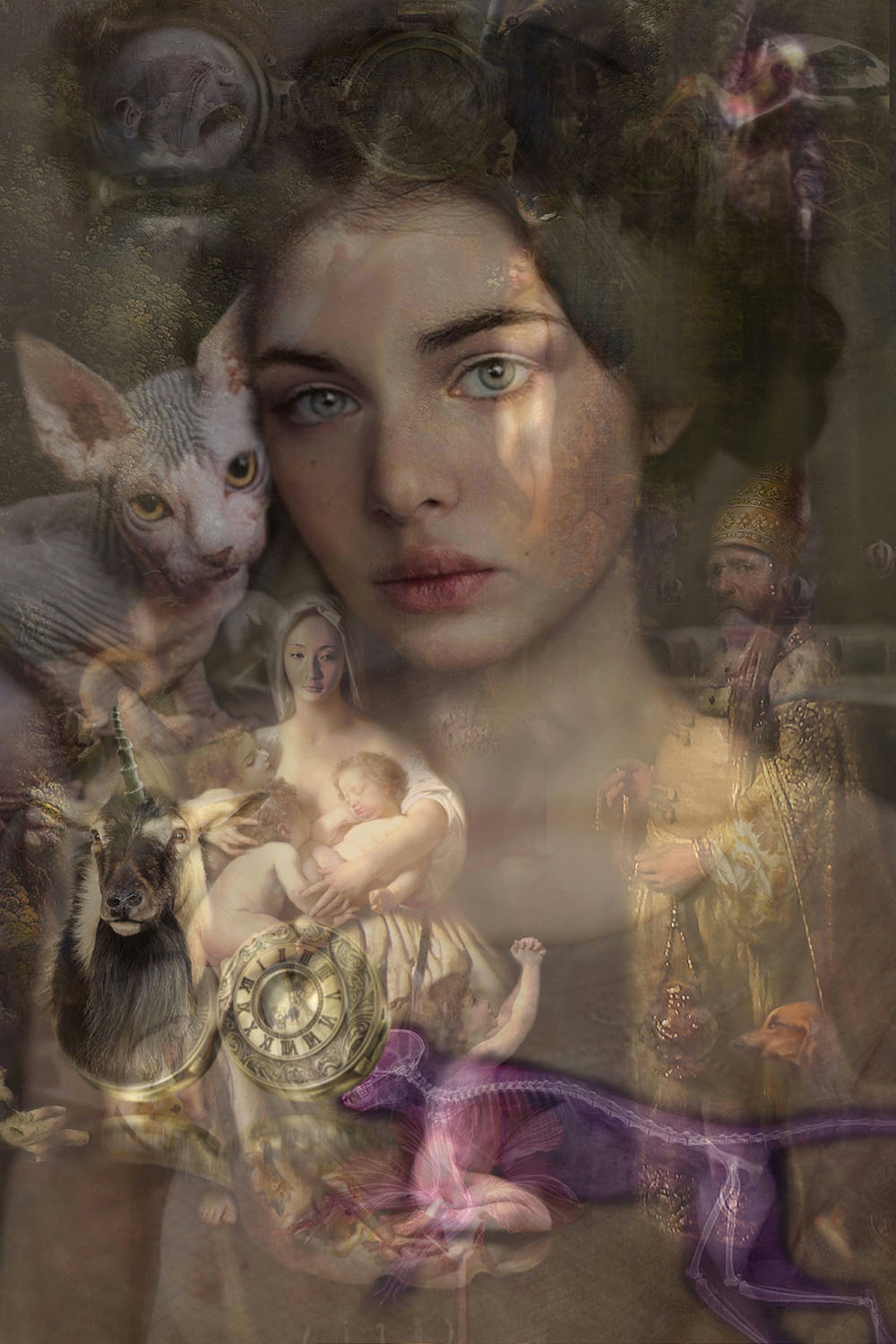 ‘Troj has long been inspired by Japanese art and culture – traditional and contemporary – evident in the strange characters and icons which populate her landscapes alongside nude renaissance figures. It would be straightforward to assimilate Troj’s work with some sort of allegory. However, the artist is open to expressing the danger in utilizing this as a tool that is often too culture-specific. Instead by breaking up classical motifs, Iva Troj introduces parallel stories in a postmodern shift, binding the inescapably contemporary with revived histories.‘ 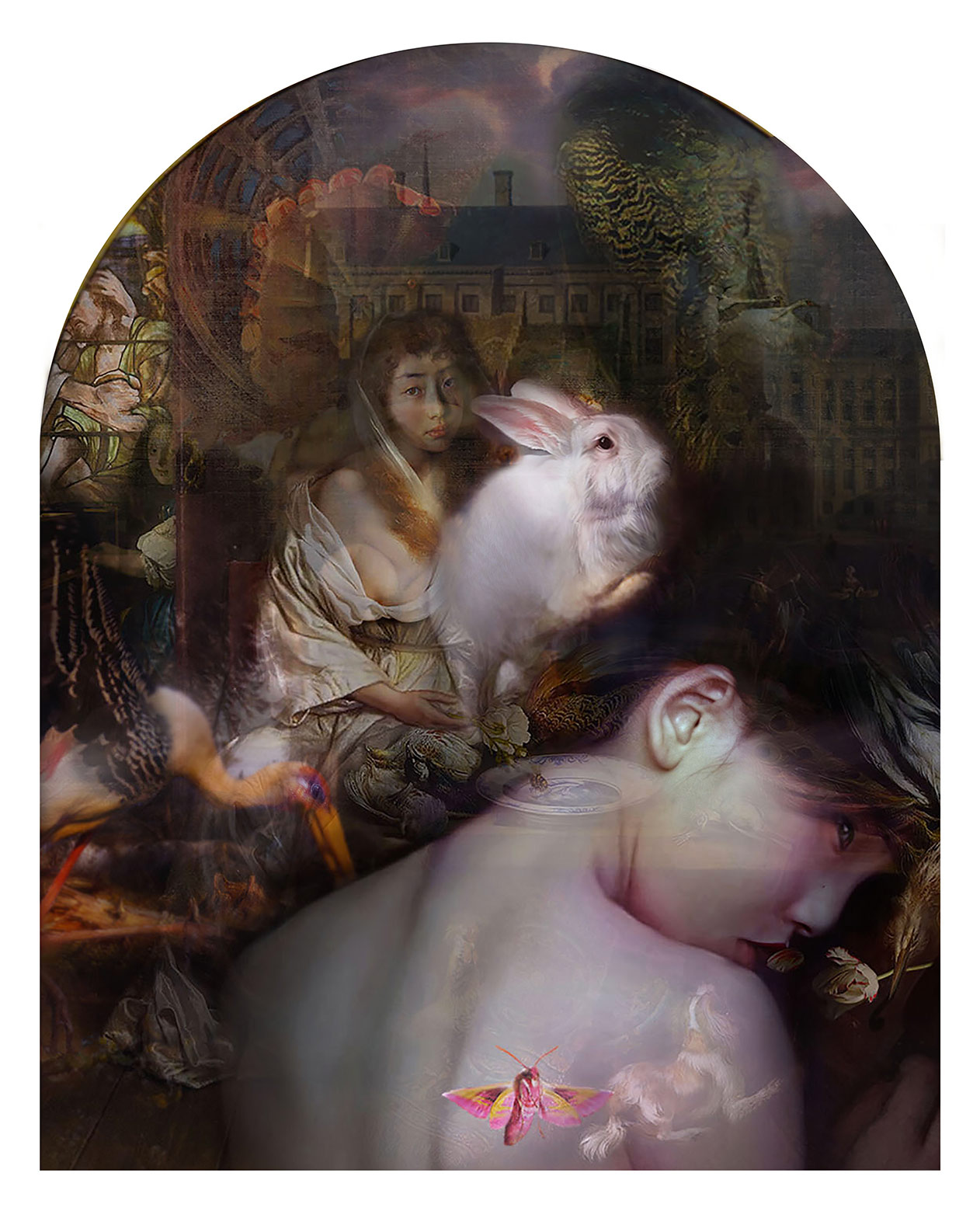 ‘In many ways, I am what you get when you throw ancient Sakar Mountain wisdom failing to adapt to totalitarian ideas right into the pits of post-industrial capitalism. My grandmother’s village used to be in the no man’s land surrounding the Turkish and Greek/Bulgarian border during the communist regime. It used to be totally isolated from the industrial world and there was no school or a library (or pollution). And somehow my grandma knew what Wabi-sabi was. I asked her about it and she told me a story about a lion tamer. Beauty is ”imperfect, impermanent, and incomplete,” she said. I am not sure how I came to find the clues to Japanese culture. She never talked about China or Japan, “intimacy”, or appreciation of the ”ingenuous integrity of natural objects”. That was not how she spoke. Instead of using fancy words she showed me things and explained their beauty to me. Her house and her garden were full of evidence of beautiful imperfection.’ 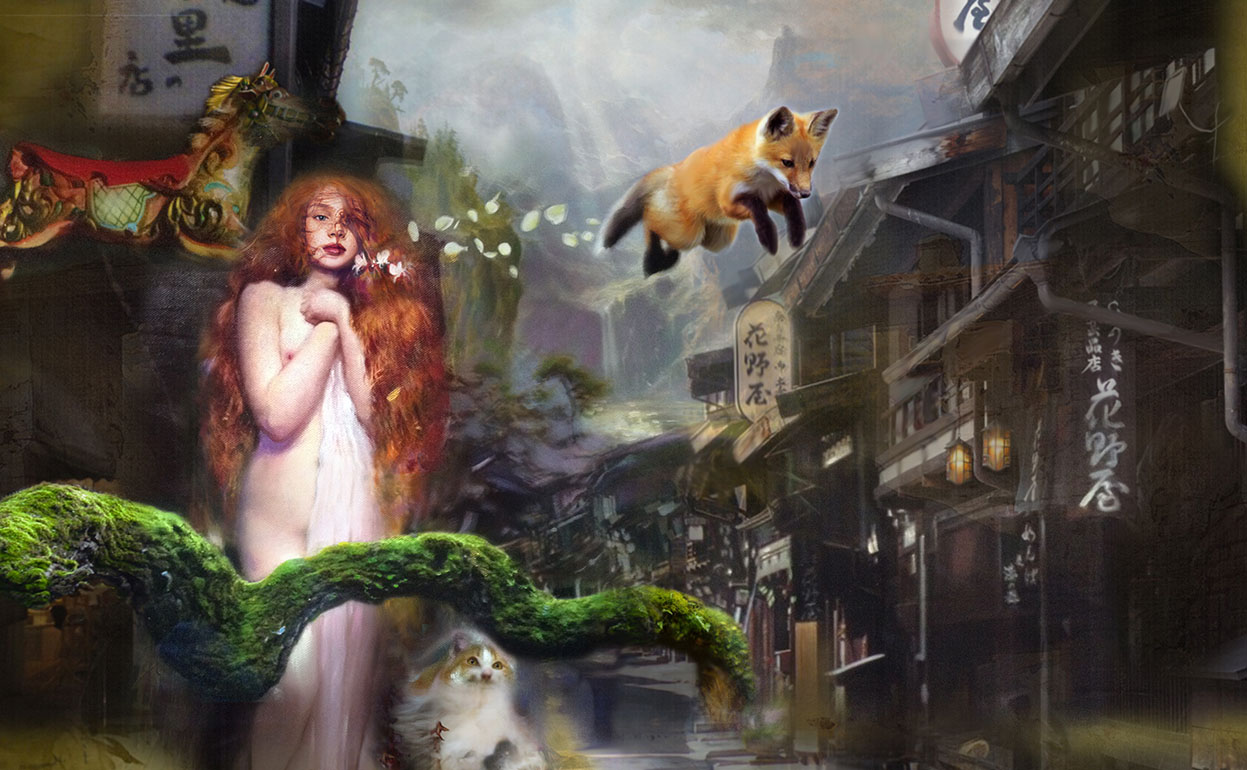 How did you become an artist?

As a child, I was taught to question one-dimensional narratives, which grew from a survival technique to a development technology of the artistic self. The foe I so often portray almost always represents the normalization of one or more dysfunctional discourses, such as the victimization of the female gender, religious dogma and racial inequality. 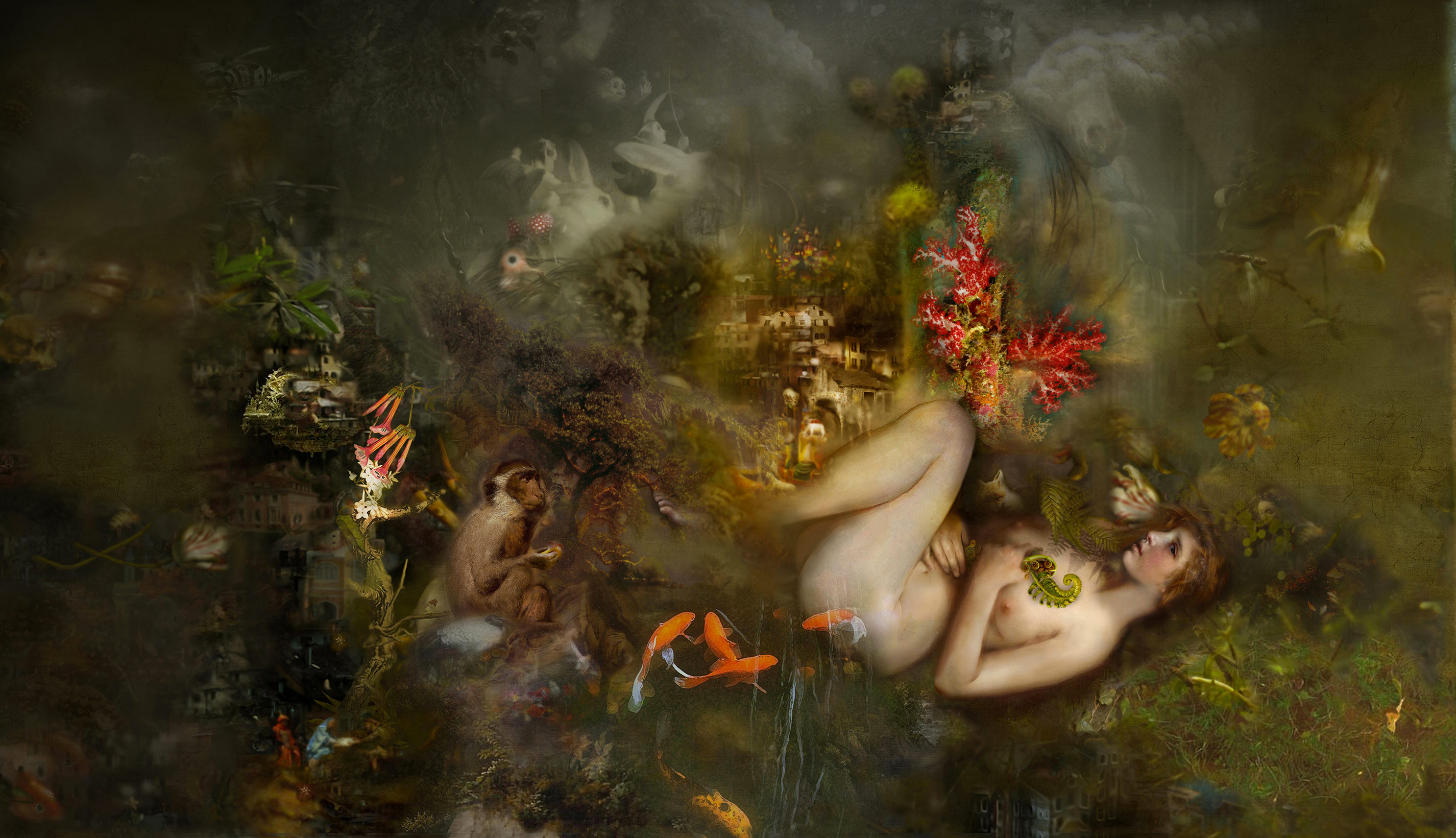 Like many artists, I discuss personal experiences. At the same time, I strive to escape the self, an urge that partially stems from crossing borders in the last years of the cold war. Living through cultural starvation in my childhood has made me restless and hungry for honest creativity with an almost childlike curiosity. In that sense, nothing I discuss is strictly personal. Sexual abuse, violence, trauma… I may present an unusual perspective on these topics stemming from the self, but only from the outset. The work needs to keep changing, relive itself, challenge its own conformity. 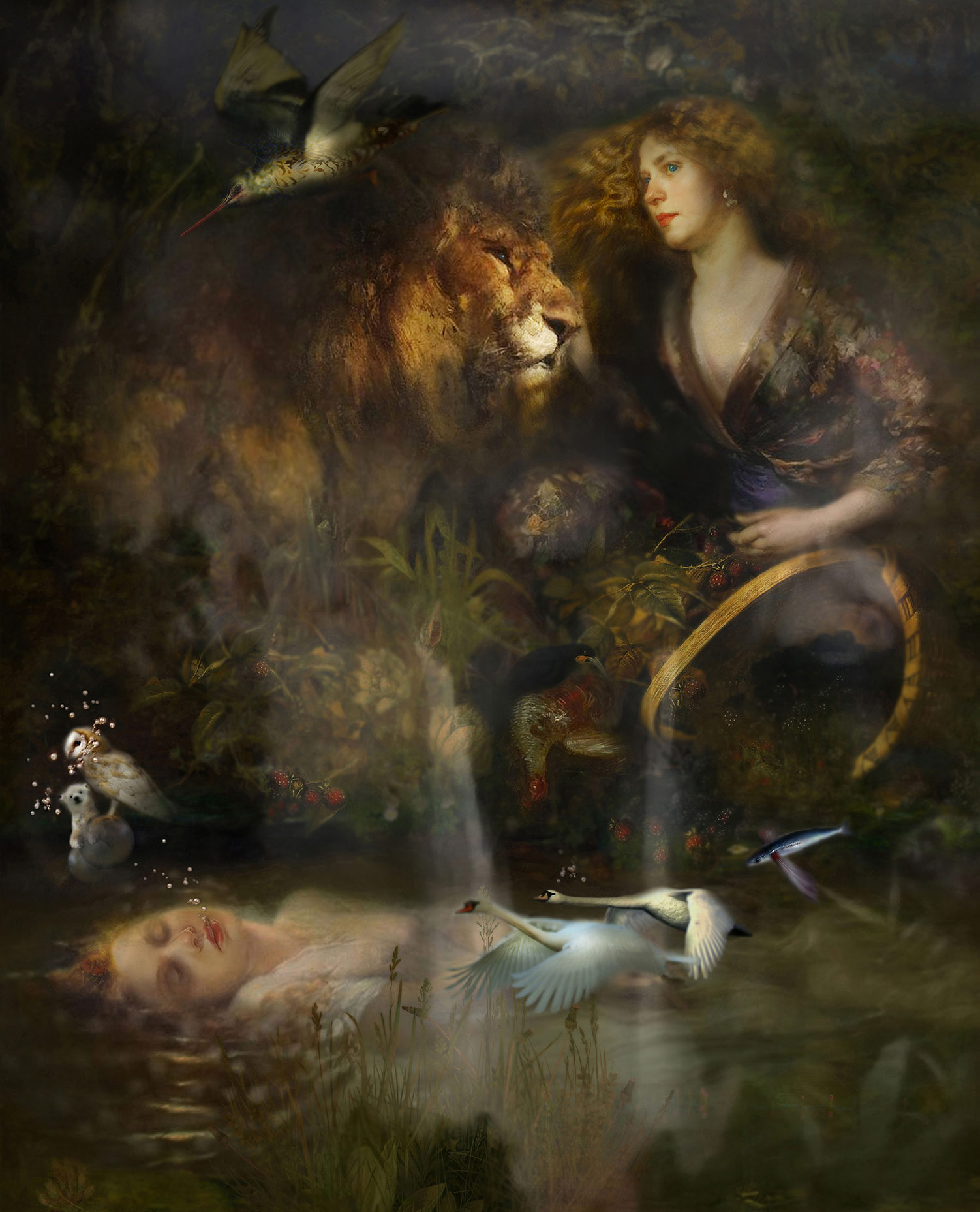 There is a point in every artist’s career when one is tempted to choose a tested and proven path. I’m constantly trying to resist this temptation by containing the “paths” in series where I can explore a motif or a theme without succumbing to the comforts of one visual style. The artists that I look up to for inspiration have one thing in common – constant renewal.

Traditional elements are very central to my body of work. It’s not so much a need to keep the style ”traditional”, but rather the way I speak. I grew up in a communist country. We sang songs about machines being superior to man and praised modernity while destroying nature and killing creativity and the human spirit with it. At the same time, my summers were spent in the mountains with my grandmother who had hanging gardens, thousand stories and no TV. These two realities are inseparable in my mind. 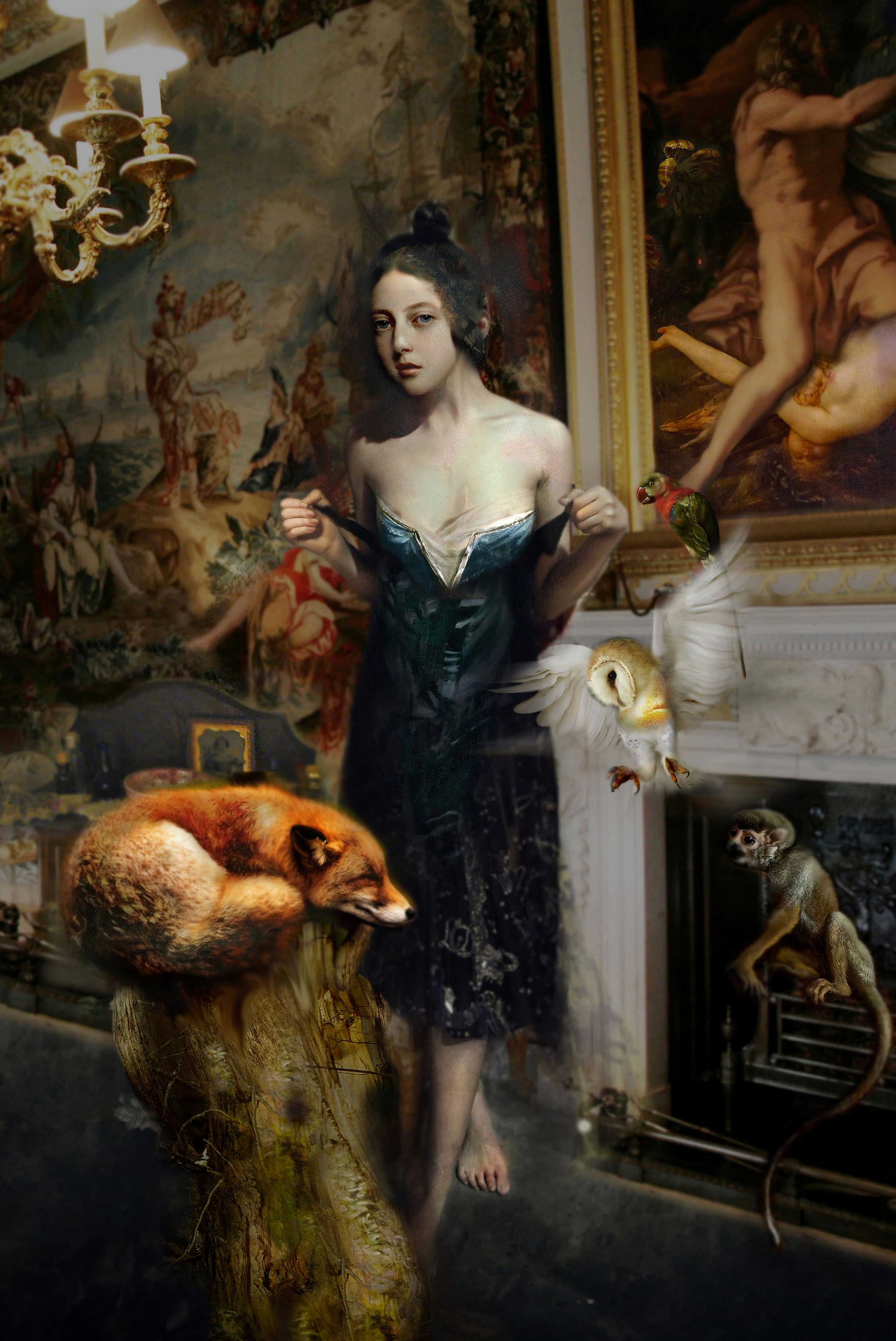 The painting technique I mostly use resembles the Flemish method of layering thin veneers of paint between layers of varnish. I start with pencils, pastels and varnish. After that I paint a lighter layer with acrylics and finish with a couple of thicker layers using a combination of mediums, often acrylics and oils, but sometimes gold leaf and inks.

What materials do you use to create your layered paintings?

I use pencils (Derwent), good quality acrylics, not the cheaper brands although some may work occasionally. I’m happy with Winsor & Newton acrylics and Titan’s, but not the soft tubes, they are semi-transparent, plastic looking and don’t dry well, as in create build-up which has led to having to use lots of sandpaper. Also, some acrylic paints crack when subjected to cold or dump conditions. In regards to varnish and glazes, I sometimes prefer the varnishes created for wood rather than canvas. 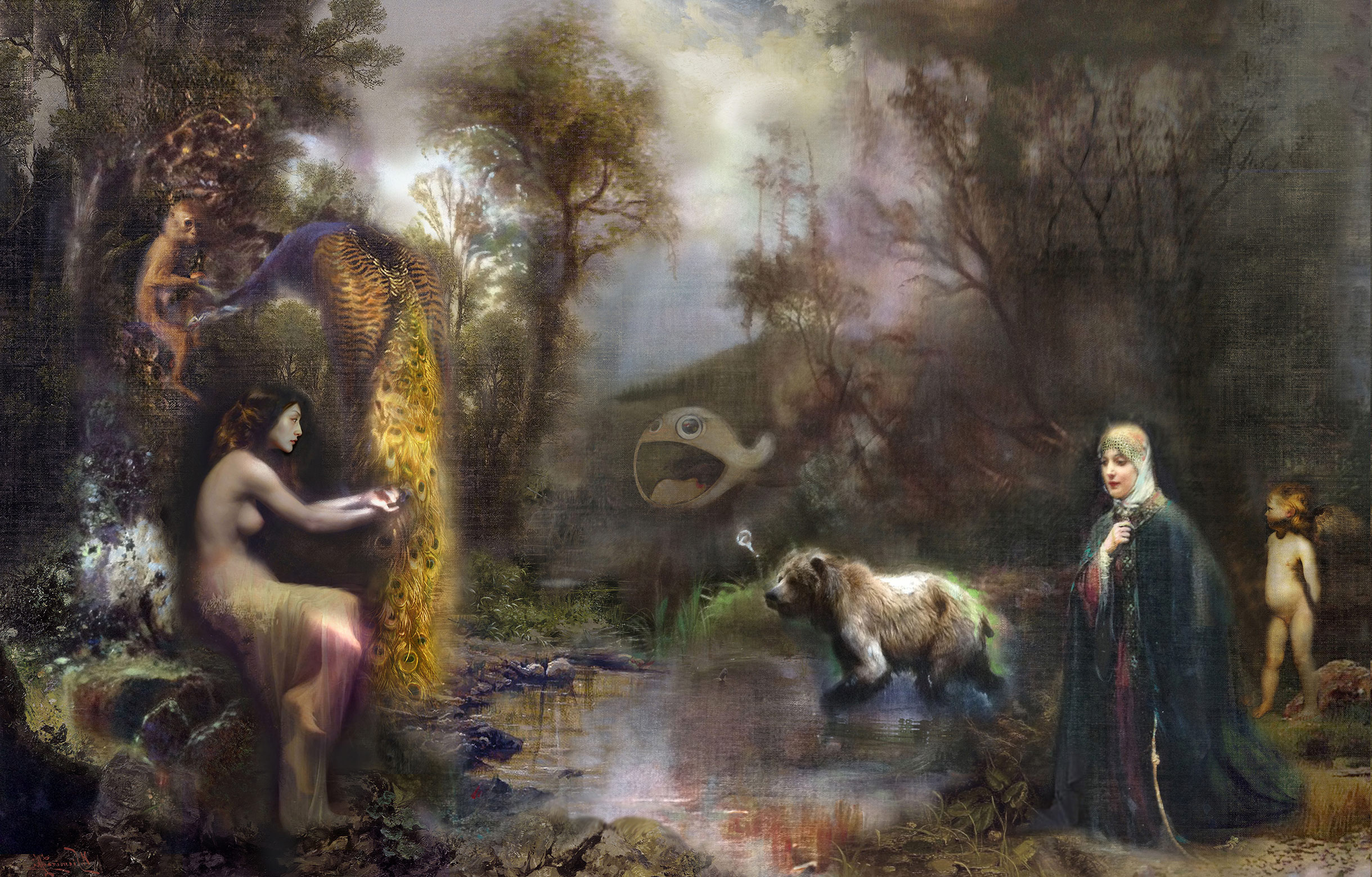 What about research methodology captures you and how does this inform your work?

I’ve always had that something that Swedish people call a “bloodhound personality”. If I have a question in my head I’ll look for an answer or not sleep. Being interested in that kind of thing is part of my nature and, of course, when something is part of your nature it comes through in the paintings. I have always felt that telling stories about sensitive topics implies vast knowledge of the human nature. So you have to be able to do your research or you are going to fall flat on your face. 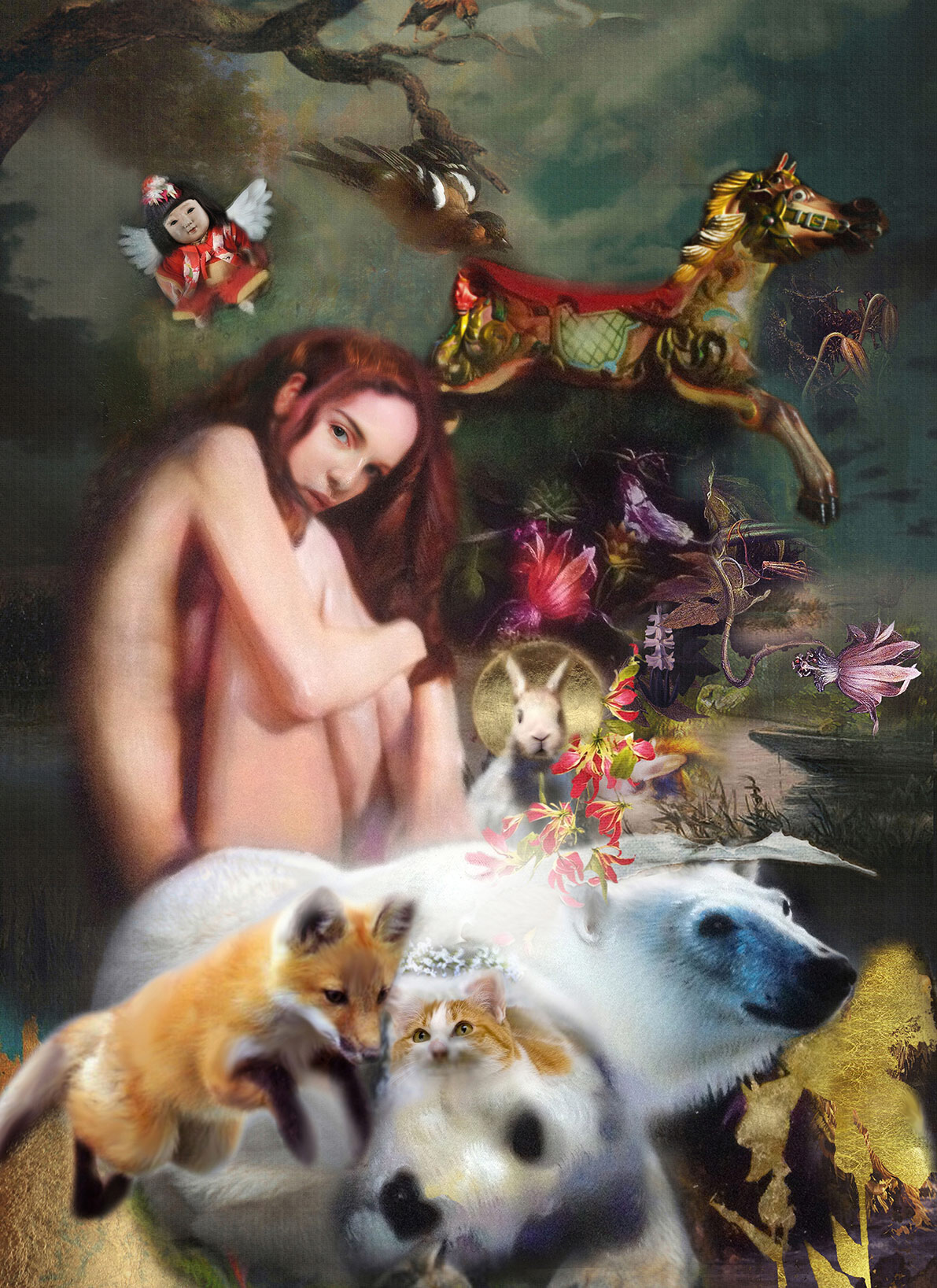 Your work seems to have a sense of containment, is this something you deliberately accentuate when designing a composition? Do you ever adapt a composition at a later stage of painting?

The sense of containment comes from visually trying to keep something harmful under control as a way to convey a conflict or a dichotomy (as in motherhood vs. social withdrawal and nature vs. the unnatural, etc). This is mostly something I have done in my recent work, with the Milk series especially. It started while I was working on my Embrace series in 2014 and 2015, for the Piccadilly “Laid Bare” show in London. In Embrace, I tried to bring components of the story together, which resulted in some very “tight” compositions and the way people reacted to those compositions, as being “in the presence of a powerful emotion”, made me want to explore these closer. 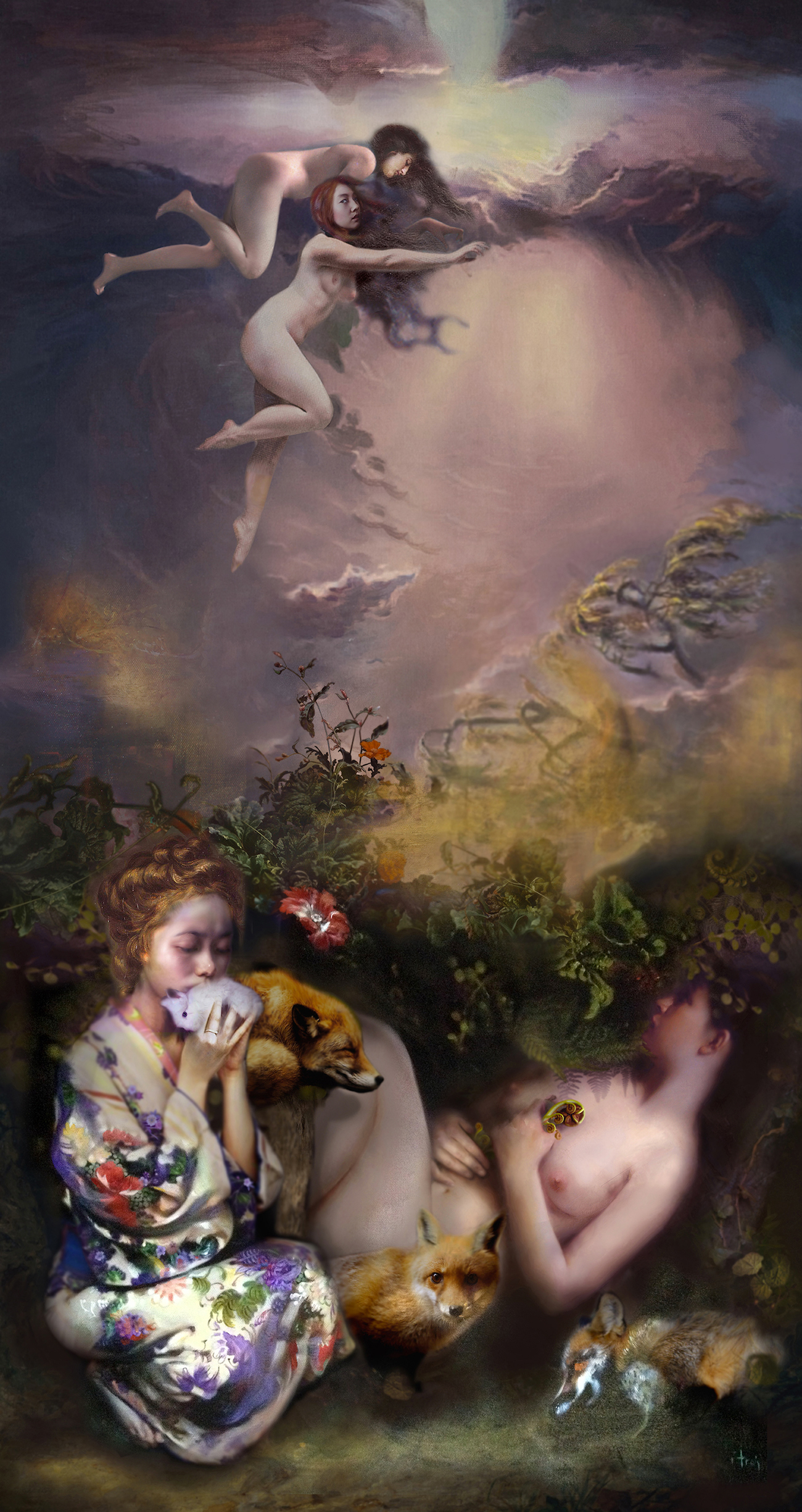 You say you seek to expose underlying stories and provide parallel allegories and stories, where do these alternative narratives come from and how do you feel you visually describe the conflict inherent in them?

I often find myself looking for the conflict in art and if the conflict is missing I would find the artwork unengaging and move on to something else. There must be a conflict in there or the story falls flat, even if it is a simple play of dark vs. light. The way I visually construct these stories may seem subtle to some people but I often find it quite simple (not simplistic, just straightforward). If you paint a portrait of a couple embracing in a polite hug people looking at it will think “that’s nice” and move on, but if you make the embrace tighter and put a twist in a simple gesture like for example fingers digging deep into the other person’s arm, people will stop and think “there is something going on here”. And the symbols you add on top of that will give clues about the nature of this conflict. It is as simple as that.

Do you work on one piece or narrative at a time or do you find they interweave and speak to each other as you work? Would you say they build up a serial narrative or world?

I have to challenge my own attention span all the time because I’m restless by nature and keeping to one story at the time is hard. I allow myself to build layers of stories and some of these layers appear in other paintings as well. It’s like layering up beats in music compositions, each layer does it’s own thing. It’s all about getting them in sync. The way these layers find their sync is usually something that is unique to each individual storyteller. If you have that and you know what it is then you have something to do for the rest of your life. Just don’t go to the pub every night and waste it. 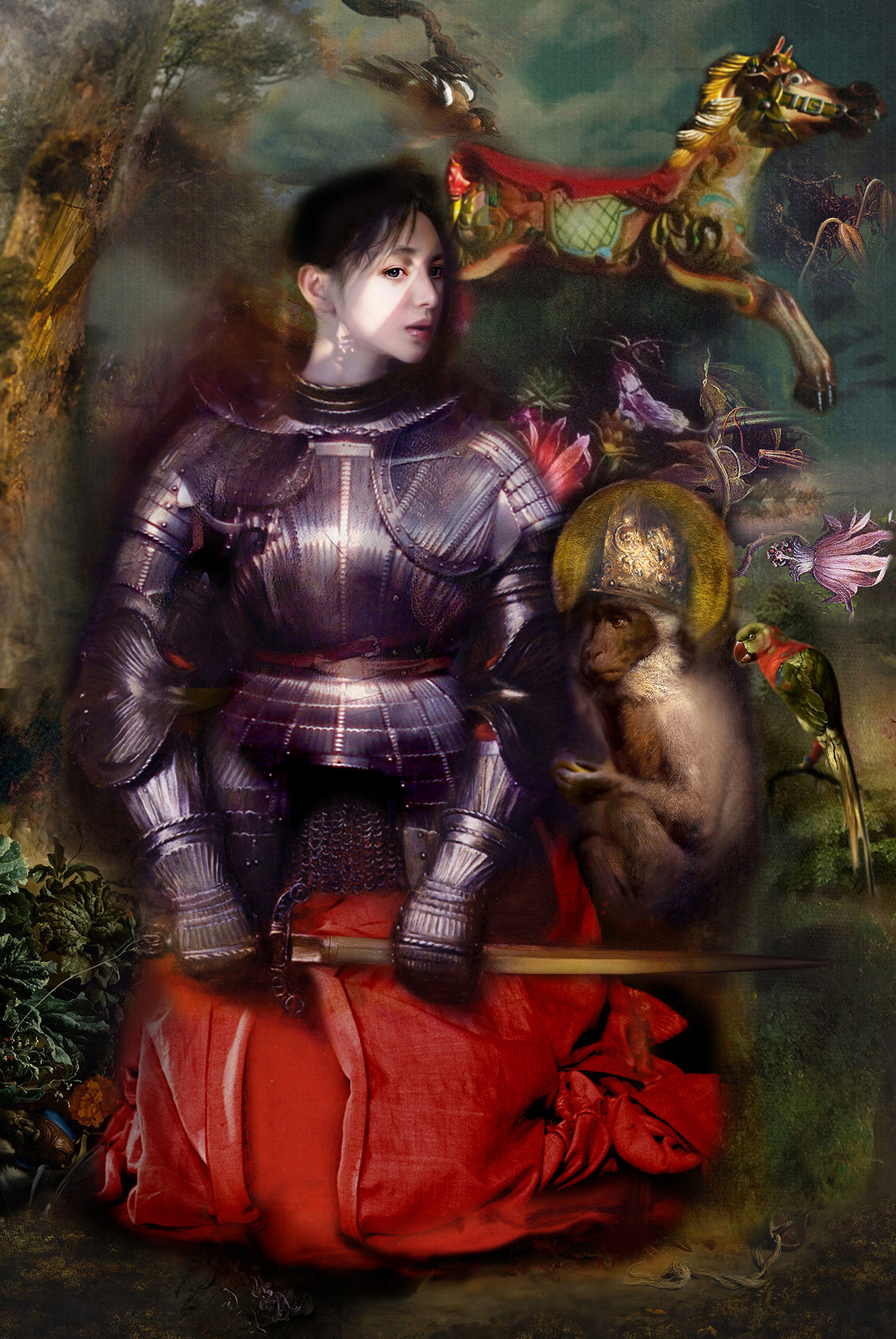 Which artists do you admire?

The artists that I admire have one thing in common – constant renewal. Quite understandably, I tend to follow currently living artists and have a soft spot for many female artists such as Hikari Shimoda, Cinta Vidal, Brandi Milne, Yayoi Kusama, but also for sculpture artists like Kris Kuksi and Xu Bing, and painters such as Harry He, Travis Louie and Gerhard Richter. 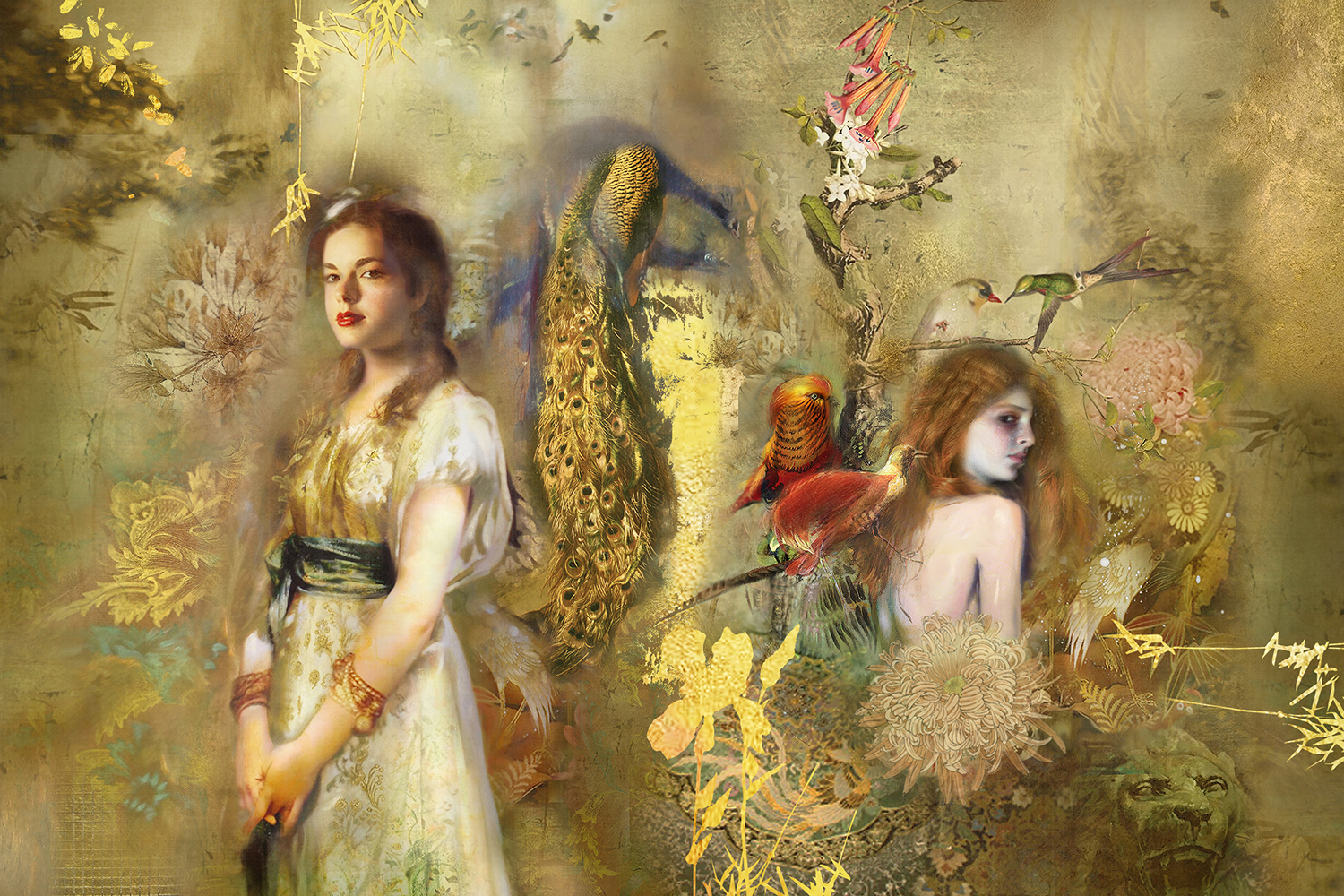 What are your ambitions?

Being able to rise above mediocrity. There is a special kind of happiness in knowing that throughout your life you have taken risks in order to rise above mediocrity and I want to feel that happiness before my earthly life comes to an end. Nobody explains it better than Kazuo Ishiguro in ”The artist of the floating world”. I fear stagnation more than anything, both in my artistic career and in my relationships. 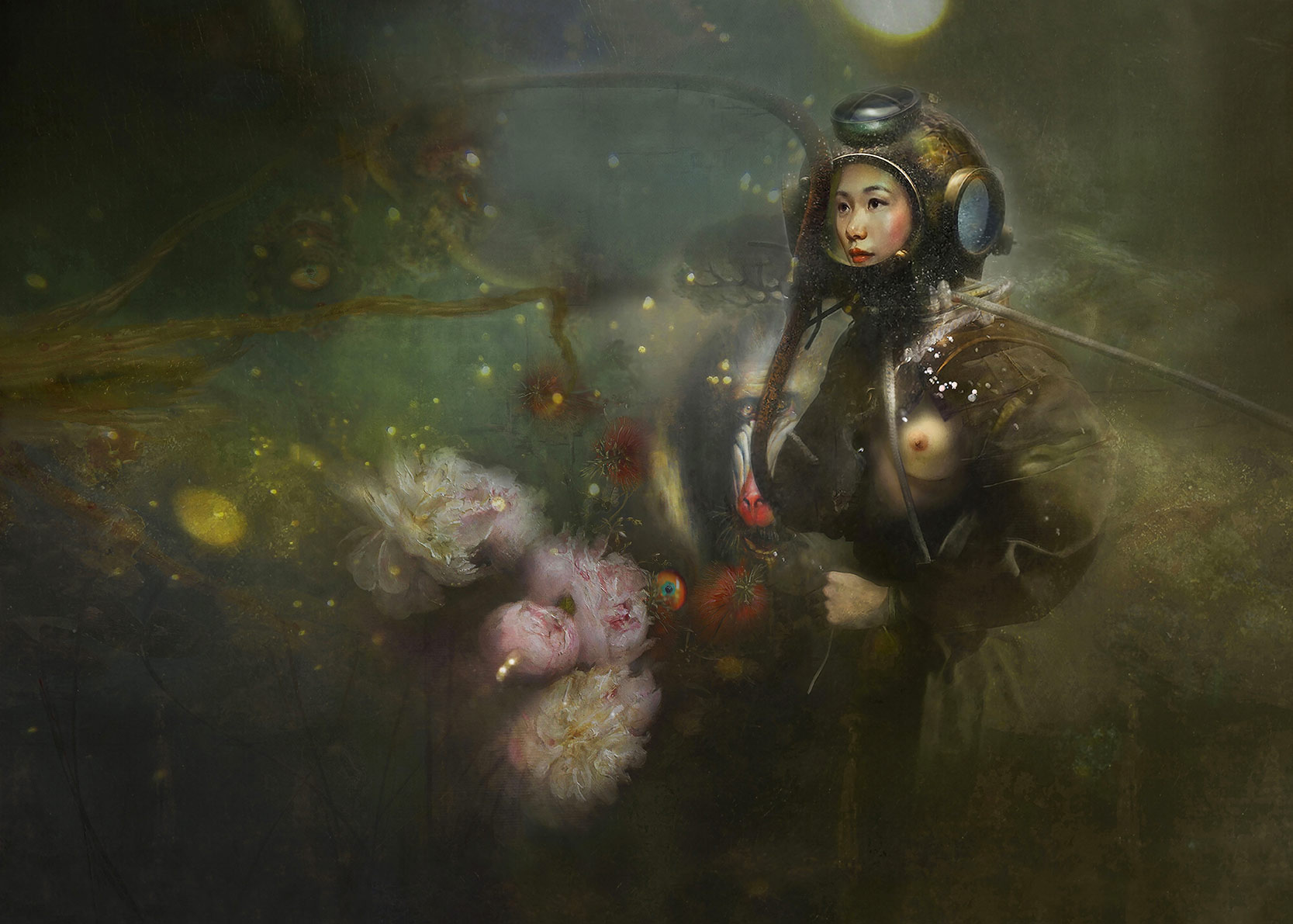 Where is your studio? What is it like and do you have any studio rituals?

I am looking for a studio at the moment so right now I am working in my lounge and there is art everywhere, mine and other people’s. I tend to buy art whenever I have money to spare. So in a way, that is a studio ritual, because I surround myself with artefacts. Other than that, I binge-watch/listen to news and podcasts and sometimes to music. I don’t work well when it is quiet. Maybe because I have always lived in the city and right now I live in the country just outside Brighton. I miss the sound of people doing things around me. 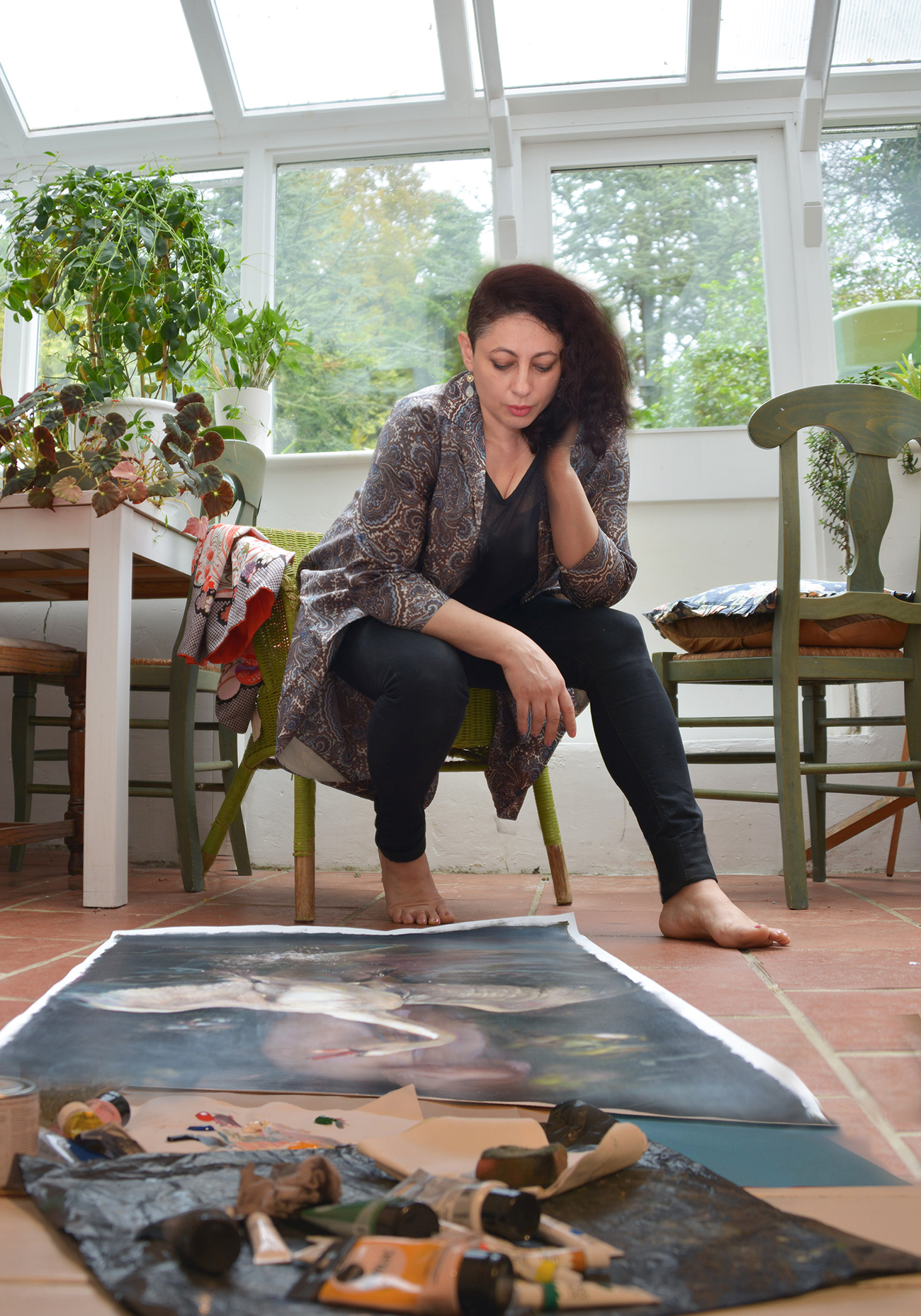 Iva Troj in the studio

Ivas work was featured in the 100 Years on Exhibition

This site uses Akismet to reduce spam. Learn how your comment data is processed.